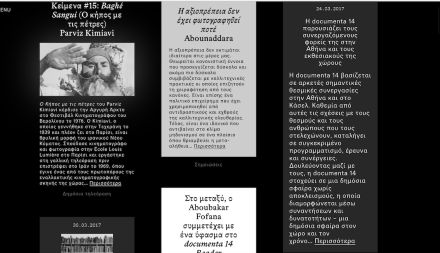 Documenta 14  in Athens is opening on the 8th April and still its PR department keeps its cards closed to its chest! In the previous week(24 March) documenta just announced the collaboration with the various institutions in Athens and gave a description of the events for each venue. I found all the information on  the website “Universes in Universe “(http://u-in-u.com/en/documenta/2017/documenta-14-athens/venues).  In an ideal world I would like to follow all the events but probably I have to follow Adam Szymczyk’s advice “the visitor needs to make a choice of what he wants to attend” and choose some of them:

In the documenta 14 exhibition at Odeion Athinon, the willfully mystic and modernist Greek composer Jani Christou plays a central role. Whereas his notion of the “continuum” provided an early experimental framework for working sessions between artists, curators, and the documenta 14 team, Christou’s idea that “music can be silent” and his methodology of “metapraxis” are relevant to a consideration of other composers like Pauline Oliveros, the Scratch Orchestra of Cornelius Cardew, and the new generation of artists presented at this venue.

Since the fall of 2016, Arnisa Zeqo of aneducation (the public education program of documenta 14) has led Elective Affinities, a seminar inviting students from various departments to engage with documenta 14 artists. The exhibition in the lofty galleries of the N. Kessanlis Exhibition Hall reaches beyond Athens, examining work from Ciudad Abierta, or “Open City,” founded outside Valparaiso in Chile, from Rabindranath Tagore’s Santiniketan school in the Bengali countryside near Kolkata, and from Matanzas, the “Athens of Cuba”—to name just three key schools and sites of learning that documenta 14 examines.

documenta 14 enters into a dialogue with four of the museum’s branches: the Benaki Museum of Islamic Art; the Nikos Hadjikyriakos-Ghika Gallery; the Mentis Center for the preservation of traditional textile techniques; and the Pireos Street 138 Annex, located in the once industrial Rouf area. With its inward-looking architecture and spacious inner courtyard, the 138 Pireos St. Annex offers an opportunity for investigating untold, unfinished, or otherwise overshadowed histories—and proposing novel museologies, instantiated by the newly commissioned and historical works included in this major portion of documenta 14 exhibition.

Documenta 14 asks what (kind of citizen) can this factory still produce? The figure of Diogenes—the Cynic, cosmopolitan, and self-proclaimed citizen of the world—serves as our guide, whom we encounter on the ground floor in the copper engraving of Nicholas Poussin’s painting Landscape with Diogenes. Known for his austerity, Diogenes dispenses even with his cup after observing a youth using his bare hands to drink water.

The extensive music program presented by documenta 14 takes center stage at the Megaron concert hall complex. Major works such as Henryk Górecki’s Symphony No. 3, Op. 36 (Symphony of Sorrowful Songs) and Frederic Rzewski’s The People United Will Never Be Defeated! are being performed along with pieces by singular contemporary composers such as Julius Eastman, Éliane Radigue, and Jakob Ullmann. Joaquín Orellana premieres his new work Sinfonía del Tercer Mundo (Symphony from the Third World), a culmination of years of experimentation with choirs and orchestras as well as his own invention, the “utilés sonoros” (sound utensils), which is on display at the Megaron at the time of his performance.

Maria Eichhorn’s work at the site consists of converting the building into an unowned property, which is to remain unused and protected against gentrification, real-estate speculation, and acquisition for commercial purposes.

The two artists of Prinz Gholam appropriate the ancient architecture of these sites o and write their history anew by orchestrating a movement score of correspondences between the statues and their own bodies.

Presented at the museum is Collective Exhibition for a Single Body, a proposal formulated by documenta 14 curator Pierre Bal-Blanc in collaboration with Greek choreographer Kostas Tsioukas and dancers Myrto Kontoni and Anastasio Koukoutas. A body is dissected into distinct parts, as in an anatomical study. Each part, limb, muscle, or organ becomes the medium of an action overseen by the curator and the choreographer and created by selected artists participating in documenta 14. The proposed gestures are translated into scores and performed amidst museum visitors by three dancers in an aleatoric fashion, repeated continuously.

The industrial district of Moschato is characterized by workshops, tavernas, wholesale shops, and low-income housing blocks. It is also home to the Athens School of Fine Arts, Pireos Street campus. Not far from the school are two adjacent spaces sharing the same address. The first, a former print shop with high ceilings and concrete floors, houses Otobong Nkanga’s production of new soap recipes inspired by different regions of Africa, the Middle East, and Southern Europe. Next door, in a former taverna, Nikhil Chopra stages a three-day performance in which he makes a wall drawing of the open sea, before setting off for a road trip to Germany through Eastern Europe. The road trip is punctuated by performances with public drawings and collaborative events, with the cycle concluding upon his arrival in Kassel.

For eight months, the building has been the site of the Parliament of Bodies, a space for public debate and collective performance, and it continues to have this function throughout the exhibition. In this context, we ask what does it mean to be public? Who can narrate history? Who is allowed to speak? Can the museum be used against its own colonial and patriarchal regimes of visibility? The Museum of Anti-Dictatorial and Democratic Resistance also serves as one of the sites of the exhibition by hosting a film by the Syrian collective Abounaddara.

Between the Athens Conservatoire (Odeon Athinon) and the Sarogleio Building (Armed Forces Officers Club) lie the foundations of the ancient Lyceum of Aristotle, established by the philosopher in 335 BC with a focus on peripatetic learning. The ancient Greek word περιπατητικός (peripatêtikos), or “given to walking,” signals Aristotle’s key notion of learning as a movement of the body in tandem with the movement of the mind. In the installation by Postcommodity, movement takes the form of sound at the archaeological site. Transmitted through highly precise military-grade speakers, stories of forced displacement, imposed journeys, and transformation are broadcast—sometimes sung, sometimes spoken, and at times merely indicated by silence.

Founded in Delphi in 1985 by Theodoros Terzopoulos, the Attis Theatre is dedicated to performing works of ancient Greek tragedy. The theater collaborates with international festivals and theaters to bring attention to the tragic drama and revitalise the knowledge of its form. It was the wish of playwright Jannis Kontrafouris (1968-2007) that his Jocasta, completed shortly before the author’s death, would be directed and staged by Terzopoulos. A meditation on human suffering, the play explores the margins of speech and barest leftovers of meaning. The protagonist here is the language itself, as it carries the traces of the once glorious past into the world of contemporary atrocity.

The former factory of the silk company, one of the oldest neoclassical buildings in the city and now the Municipal Gallery, once employed more women than men; the women were paid less than half the average male wage. In response to these and other not-so-distant histories of hard working conditions and inequality, Sanja Iveković reimagines Ludwig Mies van der Rohe’s Monument to Rosa Luxemburg and Karl Liebknecht as a public stage for workers’ rights, women’s rights, and class struggle.

On April 9, horses and riders set out on The Athens–Kassel Ride: The Transit of Hermes, in a procession that begins at the midpoint along Dionysiou Areopagitou. The procession celebrates the horses and riders as they depart on a 1,850-mile journey on horseback to Kassel, taking place over approximately 100 days. Inspired by the Swiss-Argentine horseman Aimé Tschiffely’s trek from Buenos Aires to New York (1925–28) on two Argentine Criollo horses, The Athens-Kassel Ride is conceived by Ross Birrell and developed in collaboration with Peter van der Gugten, founder of the Annual Tschiffely Memorial Ride. The ride is being carried out by Tina Boche, Peter van der Gugten, Zsolt Szabo, and David Wewetzer in accordance with the Charter of Reken.

Originally designed in 1866 to host finds from nineteenth century archeological excavations, the museum’s collections—the most extensive in Greece—date from the sixth millennium BC to late antiquity. The building’s neoclassical façade was designed by Ernst Ziller, an important architect of imperial buildings under King George I. In the 1940s, when Nazi troops invaded Athens, archaeologists in Greece (in a gesture similar to those of colleagues around the world) chose to protect ancient objects by reburying them. Daniel Knorr references this act in his (unrealized) proposal to bury the sculpture Boy with a Dog from the collection of the National Archeological Museum for the duration of the exhibition. His second proposal involves setting up a hydraulic press to print a book, in which each edition includes objects found on the streets of Athens pressed between the pages—an archeology of today, preserved for the future.

A main work on view at the Polytechnic is a model proposed by artist Rainer Oldendorf, which is inspired by the Functional City exhibition mounted in Athens in 1933. The exhibition was the culmination of the fourth Congrès Internationaux d’Architecture Moderne (CIAM 4) held on board a ship traveling from Marseilles to Athens

Ibrahim Mahama engages in an intervention on Syntagma Square that involves repurposed jute sacks, once used for transporting commodities, to reveal the layers of political action performed on this square over time.

*More venues and description of the events on the website of Universes in Universe.

From all the above probably I will be able to attend only a handful and again I feel that I am quite lucky!

“Johnny and Me” by Dia Mexi-Jones

A TALE OF TWO COUNTRIES 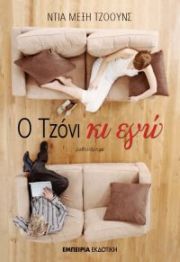 Penelope is a smart, sophisticated Athenian, heiress to 3 thousand years of culture, history and glory. Moving to England to study she encounters Johnny, her charming but unequivocally English partner. She falls in love with him, marries him and tries for a baby. What she doesn’t realise is she has a foreigner in her own house and she’s moved into an environment of cold houses, funny plumbing, strange neighbours and very curious customs. Penelope struggles, puzzles, laughs, cries and learns as she tries to understand her new life and lifestyle. She struggles to tame the new language to work for her and at the same time charm the locals to accept her. 'Johnny and Me' is a book for anyone who has ever lived abroad, met someone from another culture or ever wondered, ‘why do they do things like that?’

What they say about ‘Johnny and Me’

Take a glance at